Last week FlixBus hosted the first hackrday for the whole FlixTech organization. Although learning on the job and during working hours is appreciated and encouraged in our company, our teams used their so called "innovation time" quite differently. Some attending online courses, some reading blog posts, some learning new tools, some implementing a new feature they thought of. Many of them on their own. And many more just skipping the time in favor of getting things done. You know, the "real work".

So it was time to start an initiative to:

The idea: Every first Friday of the month is now officially hackrday! The motto of our first one: "Build something fun connected to FlixBus". Follow me on my journey of our very first hackrday - when none of us really knew what was going to happen. 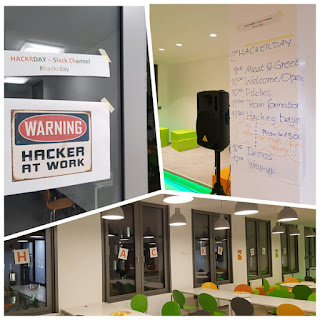 Looking forward to our first hackrday for days, some of my team members came up with a great idea what to build and I was eager to join. But when I came to the office that Friday, I learned that exactly those team members were not able to join the hackrday due to different reasons. That hit me quite unexpectedly and my "cannot wait for it" emotions suddenly turned into bad mood. And I started thinking about not joining hackrday as well to show support for my colleagues; but knowing I would regret not to experience the very first hackrday. Instead I convinced myself to at least listen to the other ideas being pitched and see if I like one of those.

As I entered the event location, another team I accompanied last year invited me to sit with them. And instantly improved my mood by providing some sweets - they know me too well! ;)). That team wanted to do what I had been looking forward to do with my own team: have a team project to work on, as a team. They kindly had me on their hackrday team as well. So I stayed; and did not regret it.

When you consider the time required for introduction, pitches and demo sessions, having only one day did not leave much time for actual "hacking". So we had to use the time as efficiently as possible to have a maximum of valuable outcome at the end of the day.
Well, and then one of our agile coaches approached us, asking the very essential question:


"Why do you assume that there is a problem for the solution you want to build?"

Oh yeah. Well said. We were so keen on realizing our idea - we forgot about the basics. So we adapted the plan.
Acknowledging defeat, we returned to the rest of the team and told the news. We knew that the number of persons we asked were not sufficiently representative. But it was clear enough that if we thought about a productive solution, we would definitely need to get real data from our actual target group to find out if they really didn't show any interest as well. Well, as this was hackrday and about learning and fun, we decided to continue with our idea anyways.
During the whole day we checked in with the team at least every half an hour, sharing our latest insights about the next best minimal solution. The team took them as input to build a very first backend prototype plus some UI parts. Hacking time quickly came to an end and we hurried to prepare a short presentation of our results so far - flying high on an adrenaline rush! 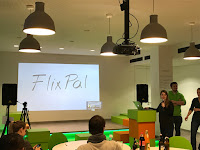 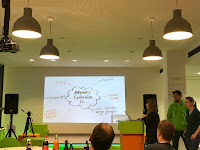 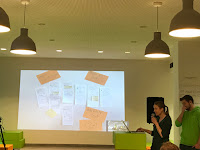 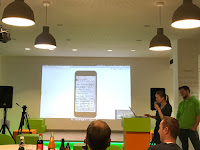 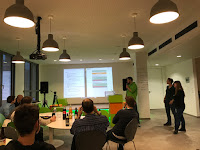 When each team demonstrated their prototypes, we found that many of them thought not only about fun stuff but about delivering business value with their ideas. Sharing our team's story how we identified our hypothesis as invalid caused laughter, but also taught some invaluable lessons for product development.
But we learned even more from this first hackrday.
Oh and we have a lot of new ideas we would love to try. We're already looking forward to our next hackrday!