Last week my team had our very first mobbing session together. I was quite excited! I have read and heard a lot about this whole-team approach, and I was curious to try it myself. I had a first glimpse of how it could look during a coding dojo I attended a few weeks ago, but I really wondered how it would be to try this with the people I work with every day. I guess I talked a lot about mobbing, presenting it as a potential solution for some of the problems we are facing. And suddenly, during a sprint retrospective, my team decided to give it a try! Here's the story how it turned out.

Since I was the one who triggered this experiment, I was also accountable for having it facilitated. However, I also wanted to join the mob myself. So I asked our agile coach if she was willing to help me and act as facilitator during the session. So glad she agreed!

As nobody on our team ever tried mobbing before, I wanted to have our first session facilitated as well as possible to get everybody on board. To prepare for it, I used the following valuable resources on mob programming and mob testing. You can skip over them for now, but in case you would like to facilitate a session yourself, I highly recommend following those links.
All resources recommended starting with a short session, so I scheduled 2.5 hours for it. As we don't have a dedicated team room, I also booked a meeting room well in advance, as otherwise it's hard to get one for a longer time slot at my company.

Our agile coach and I sat together to prepare the session. We shared any knowledge we already had about mobbing, defined the structure and prepared posters to serve as information radiators throughout the session.

I asked my team whether they would rather do the experiment in coding dojo style using a dedicated kata, or if they wanted to work on a real story from our backlog. The team decided unanimously to go for the latter. During sprint planning just before our workshop, we picked a middle-sized, quite straightforward story and reserved it for our mobbing session.

We knew how the meeting room we booked looked and what it offered. We identified a list of things we had to bring ourselves.
What not to bring? Any other laptops or mobile phones, to avoid distraction. Though this might change later on, we decided to be strict about this for the first session to have the full focus of every team member on one thing only. 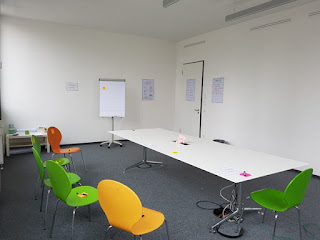 Our Daily Scrum is scheduled for 9:30 am. We decided to do a morning session, starting right afterwards. However, we knew that it will take some time to bring everything to the meeting room and to set it up, so we could only start with everybody at around 10:00. Also, it was crucial to keep the session relatively short in order to end happily and go to lunch together. 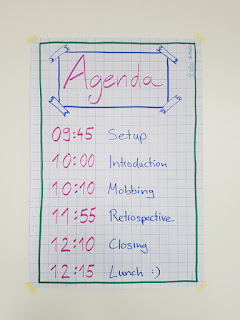 We scheduled a short introduction to mobbing to start our first session from a common ground. This was especially important as nobody on the team had experienced mobbing before.

Following Simon Sinek's advice, we decided to start with "why". 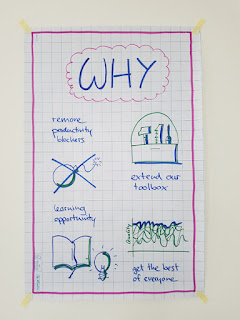 To explain the basic idea of mobbing, we used Woody Zuills famous quote: "All the brilliant people working on the same thing, at the same time, in the same space, on the same computer." As recommended, we decided to do strong-style mobbing for our first session, following the driver / navigator pattern. So we also introduced the key concept of strong-style pairing, as defined by Llewellyn Falco: "For an idea to go from your head to the computer, it must go through someone else's hands." 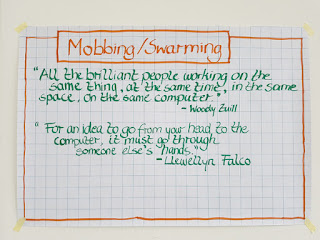 In order to explain the roles used in strong-style mobbing, we had put small cheats sheets right beside the location of the role (except for the facilitator). 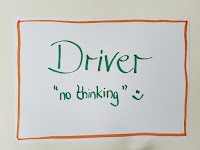 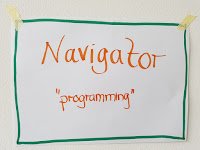 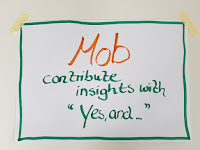 We defined the following common rules to make the session successful and valuable to everyone.
Providing examples on a whiteboard or flip chart can help as well. Or thinking in English, not in code. Going small steps, committing frequently. Do you see several solutions? Well, try both, the weirdest one, or the one from the most junior person in the room first. The mob format can work if you are either learning or contributing. 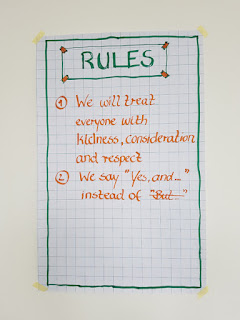 To finally get us going, I concluded the introduction with a few more hints.

We had predefined our very first rotation in advance. As we had our Product Owner on the mob who never coded before, myself having only basic programming skills, and a fresh new programmer on the team, we intermingled with the others to make sure that we didn't end up in a driver/navigator constellation where we instantly get stuck. Furthermore, we defined two core developers starting as driver and navigator, which proved really helpful to kick everything off and get things started.

During the session, the hardest part was to keep the driver from thinking and rushing ahead without waiting for the navigator. In the beginning, the mob was quite unsure how to contribute, but soon learned to give advice when asked by the navigator, or even offer that voluntarily; but to always have the navigator decide which way to go instead of directly addressing the driver.

With the quick four minutes rotation, we managed to have everybody on the team become navigator and driver at least four times, so we could get used to those roles and learn how to pick up and proceed with the implementation. At first, the rotation in the mob from chair to chair was strange, but quickly became normal. Having the bowl of cookies in the middle of the table definitely helped! ;)

What instantly became clear: Even with a quite straightforward story, we struggled with being navigator. Several of us often required support from the mob; not only those who didn't identify as a programmer or were new to the team. And we struggled even more as driver, having different operating systems installed (OS X versus Linux), different keyboard layouts chosen (German versus English), different shortcuts defined, different scrolling directions set, and different input devices in place (external Apple touchpad versus Apple mouse versus default mouse). This turned out to be quite frustrating; at points, this made everyone look like it was their first day using a computer. 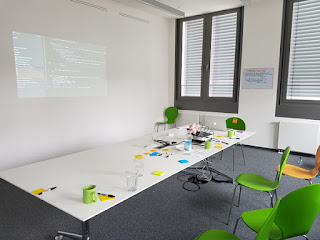 We decided to have a short "What I loved" and "What I long for" styled retrospective, with everybody writing down their thoughts on sticky notes and presenting them afterwards to the rest of the team.

What we loved:
What we long for:
As part of the closing we thanked everybody for giving mobbing a try and for their feedback. We agreed to put the started story back to "To Do" and the first developer with free capacity will pull it. Finally, we asked all team members to vote whether they would like to do a second session. The majority agreed, some were undecided. In the end, we kept our timebox and left the room in time for lunch - in a happy mood! :) 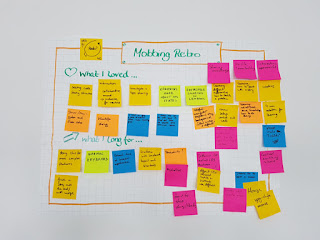 In the end, I'm really glad my team agreed to another session. Can't wait for our next learnings! Besides that, I'm feeling a lot more prepared to facilitate mobbing sessions for other teams as well. Some had heard we wanted to try this approach and showed interest themselves; one agile coach would even like to join our next session to watch and learn. Well, for now we only know the lessons of our very first session. But if you want to give it a try in your team, feel free to copy whatever you like and adjust it to what you need. I would love to hear about your learnings as well!